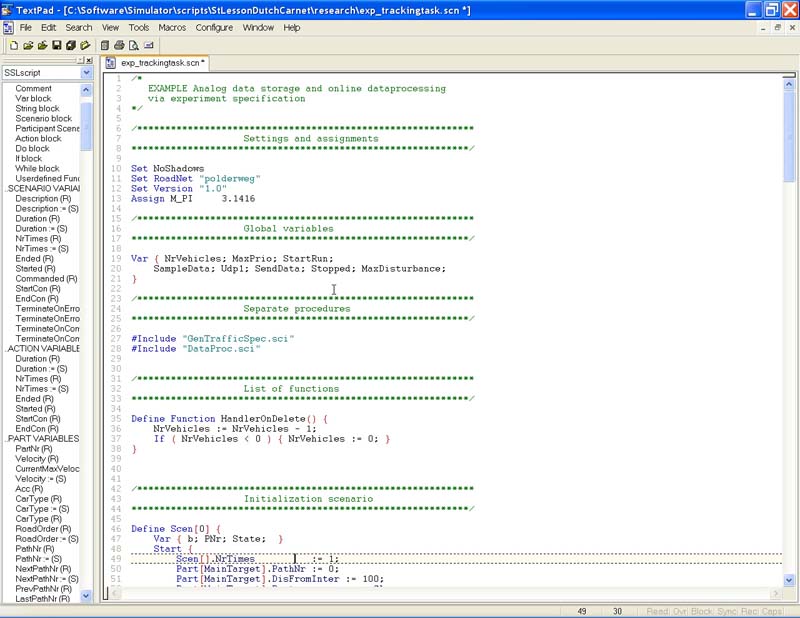 Scenario Script Language is the specification language designed by ourselves to define any number of scenarios. The term ‘scenario’ should be considered very broadly. The language was already designed in the 90-ties and has been the inspiration for a number of script languages in research simulators of other manufacturers.

The user defines the simulations, lessons or experiments in this script language. Before it is applied in the simulator, it is compiled into binary form and the script compiler checks for syntactical errors. The language is fully documented, and the research simulator software module comes with a large number of script examples.

Each scenario scripts defines a start condition and an end condition. The start condition specifies when the scenario starts. The end condition defines when the scenario ends. Any condition can be used to start a scenario, for example, when you are on a specific path (road) on a certain distance to the next intersection, or when your velocity is larger than 5 km/h, when the headway to the leadvehicle is less than 2 seconds, etc. This makes the definition of any experiment very flexible. It also makes use of the real time dynamical situation that changes from second to second.

Functionality of the script language

Apart from scenarios to define all things to run simultaneously, there are a lot of other things you can define in script. Examples are: