Driver training as the development from controlled to automatic processing. In psychological research, learning to drive a car is regarded as a typical example of a development from controlled to automatic processing by means of training, see for example an article on Wikipedia and an article of Indiana Univ. During car driving, a number of different part tasks have to be executed and integrated. Often the driver needs to switch between these part tasks. This concerns part tasks such as control of pedals, gear changing, lane changing, stopping the vehicle, driving off, visual scanning when approaching an intersection, looking at road signs, watching other traffic, applying rules of the road, etc.

As an example: when you learn to drive a car, you have to consciously attend to everything you are doing. Steering and control of the pedals require conscious attention. But watching other traffic, traffic lights and road signs requires conscious attention as well. Often, you press the wrong pedal, or you release the clutch too fast, resulting in stalling of the engine, or you turn the steering wheel too much, if the situation requires you to attend to a road sign or other vehicle. Talking with your passenger can be hard and dangerous, because talking requires controlled attention as well.

A task that has been practices very well becomes automatic. Automatic tasks require little or no processing capacity. Because of that, automatic tasks can be executed in parallel (simultaneously) with other tasks. For example, you can walk and eat at the same time. Automatic tasks are executed fast and efficient and hardly require any conscious attention. In contrast, controlled processes:

When the part tasks of car driving are not automated well enough (and still require controlled processing):

An essential part of good driver training consists of good and efficient automation of part tasks. That determines whether a student learns to drive well, the chance of passing the driver exam and driver safety.

Automation of skills is not optimal during traditional driver training. During regular driver training in a learner car, all these tasks are learned but usually not automated sufficiently. The reason is that during driving in a learner car on a road, unexpected situations occur, and there’s a lot of switching between tasks. It’s difficult for the instructor to control traffic situations and events. Because of that, individual part tasks can’t be practiced extensively, and extensive practice is required in order to make the transition from controlled to automatic processing. This results in the situation, here in the Netherlands, that most student drivers need at least 40 hours of on-road training before they are fit to apply for a driver test, for which only 50% passes the first time. Still, during the driver test, it often occurs that the engine stalls because of poor clutch control, or the student fails to scan properly when approaching an intersection. This is caused by the student driver being overloaded when multiple part tasks require controlled attention simultaneously. Driver training in a learner car on public roads is not the most effective method to learn to drive. Automation of part tasks proceeds slowly this way, and it may take up to a few years after the driver has passed for the driver test before a reaonable level of automation has been established.

Poor levels of automation are probably an important cause for the relatively high accident rate during the first years of driving in young drivers. During driving, mental workload varies considerably. Taskload increases as more part tasks that require controlled processing are performed simultaneously, or when there’s more switching between controlled tasks. An unexpected situation, for example, a pedestrian crossing the street, may result in a sudden increase in workload leading to a errors and increased accident risk. When part tasks are better automated overload is less likely and the driver may respond faster and in a safer way.

Simulations of part tasks and automation

In most driving simulators for driver training, the existing practice of lessons in a learner car is simulated. These can be more appropriately referred to as ‘driving lesson simulators’. Sometimes driving instructors wonder what this adds to the existing way of driver training, since they already use a learner car. Carnetsoft supports a different didactic principle, that is based on sound scientific research. During driver skill training, part tasks have to be automated (automation training) by task-directed practice. Each part task training, like driving off in first gear, steering or gear shifting, starts with a simulated instruction training that focusses on instruction and training of that part task. After that, there’s automation training of that individual part task. During automation training, the level of automation is measured using the Peripheral Detection Task (PDT). This is a method for measuring taskload and controlled/automatic processing that was developed in 1999 by the developer of Carnetsoft (see publications van Winsum), at first for use in driving simulators. It is now an ISO standard for measuring taskload and is used frequently in Human Factors research in the car industry and at universities. It has been demonstrated that the PDT is a good method to measure automation of driving as a result of driving experience. (Patten e.a. 2006).

In this way, the level of automation of part tasks can be established. When the part task has been automated sufficiently, the next part task can be trained. When the most important part tasks have been automated enough, training continues with integration training. Driving in various situation, like highways, motorways, large and small roundaboits and town is practiced during integration training, while driving behaviour is monitored and evaluated by the virtual instructor. 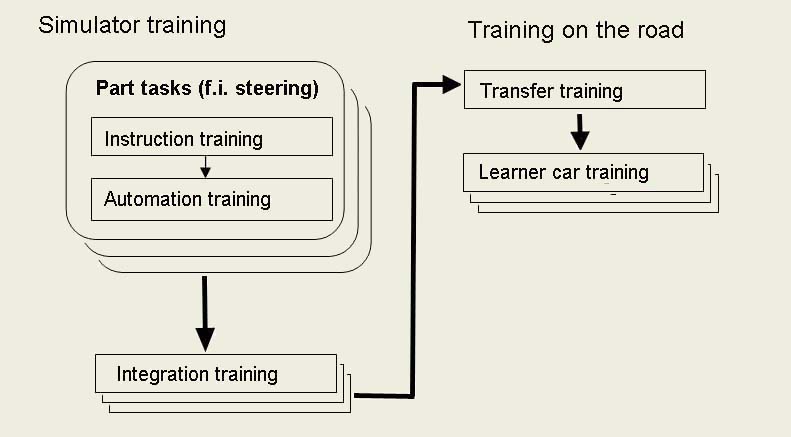